We checked in at “Hotel Chandra Bhaga” @ INR 550 for each room, being off season we got a sweet deal, the rooms were facing the “Mall Road” and “Van Vihar” They were massive will all the basic amenities.

Zariab and I had visited Manali many times before and were aware of the layout.
Frank and Vivek on the other hand were Himachal virgins.

“Chopsticks” restaurant was amazing as usual with excellent service; Frank and I tried a Japanese dish called “Sukiyaki" with some “Tibetan Bread” which was sumptuous.

After yesterdays exertion it was time to take it easy and soak in the Manali weather.
Breakfast was served at “Mount View Restaurant” the four of us packed on a healthy breakfast with “Chicken and Egg Salad”, “Mutton momos in Soup” and some “Toast with baked beans”

Walked up to the “Hadimba Temple” which is situated in the “Doongri forest” the temple is surrounded by Deodar trees which make it a very pleasant place to simply sit back and admire the amazing 16th century temple. 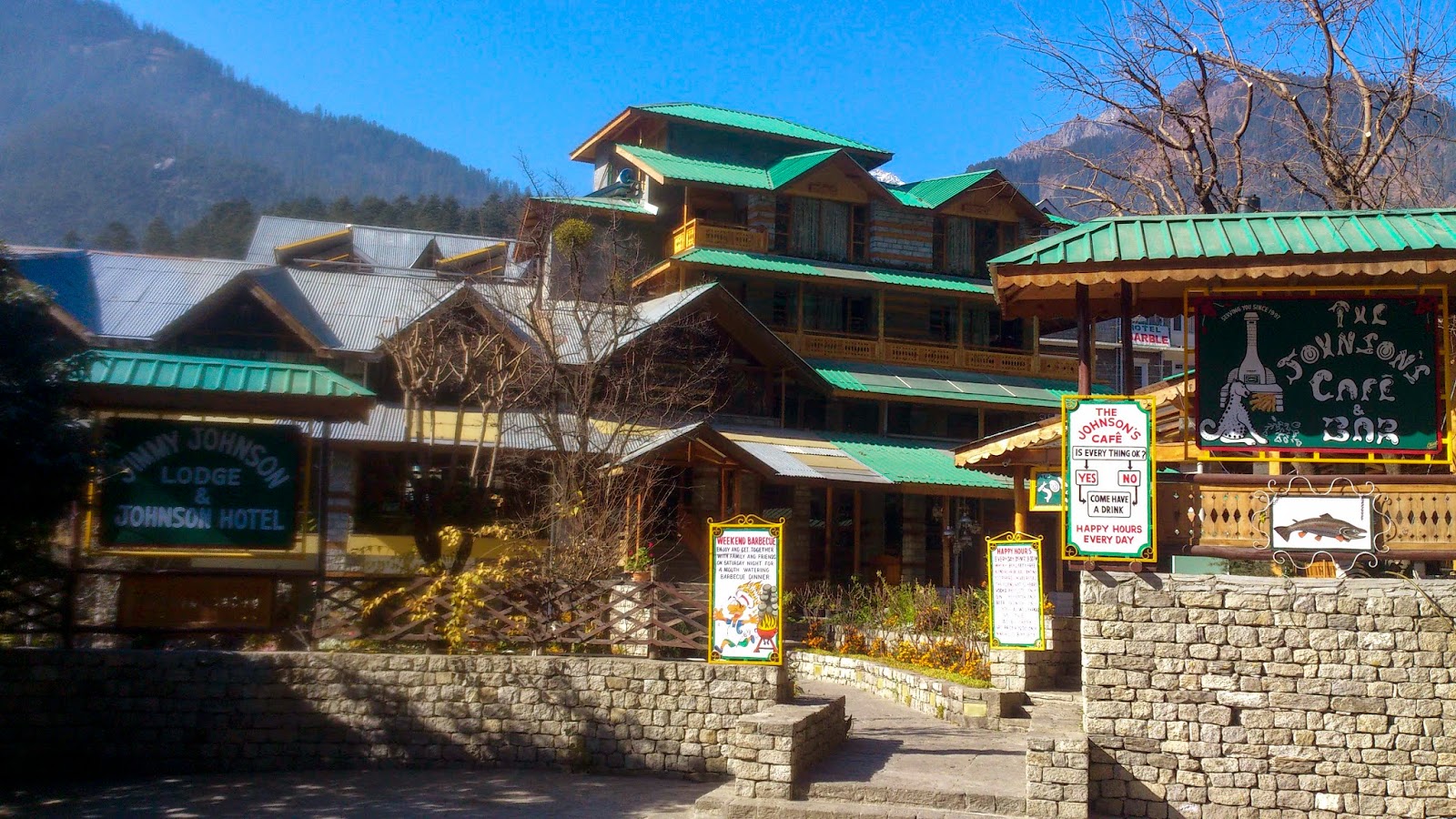 Ahead from the temple there is a good trek further into the Doongri forest, with apple plantations and a dent guest house- “Kalingcha Guest House”.

The weather got better towards evening, the frozen water on the trail did make it challenging, but it was an awesome experience.  We did not get to complete the trek cause it was getting dark and we had a good 5 to 6 hours of walking left if were to reach the top – Forest guest house.  As is with most mountain trails we descended swiftly right in time for dinner.

After an amazing dinner it was time for some night snack, we feasted on “Apple Strudel” and washed it down with some Rhododendron wine.

I woke up early at about 7:00 am for no particular reason and decide that I need to go for a morning walk, to my surprise as soon as I got out of the hotel the December cold felt like I had been smacked across the face. Since most of the restaurants don’t open before 9:00 am, I quickly made my way to the local bus stand for some hot tea which just felt awesome in the cold weather.

After the boys woke up we had breakfast at “Mount View Restaurant” which consisted of, “Russian salad”, “Niçoise Salad”, “American Breakfast” and “Chocolate Milk”

Frank and I entered the “Van Vihar” @ INR 10 each which was about 5 minutes walk from the “Mall Road”, it was a good place for a leisurely walk or some power reading, the Deodar trees provided a peaceful and tranquil feeling, towards the interior, the park gets parallel to the Manali River, as per the ticket we were not allowed to exit the park or the ticket would be void, anyways we did exit the park from there and the river was worth it, the sound and the surrounding trees along with the mild sun juts felt right.  After a relaxing walk alongside the river we headed back into the park J and made our way towards the Mall road. 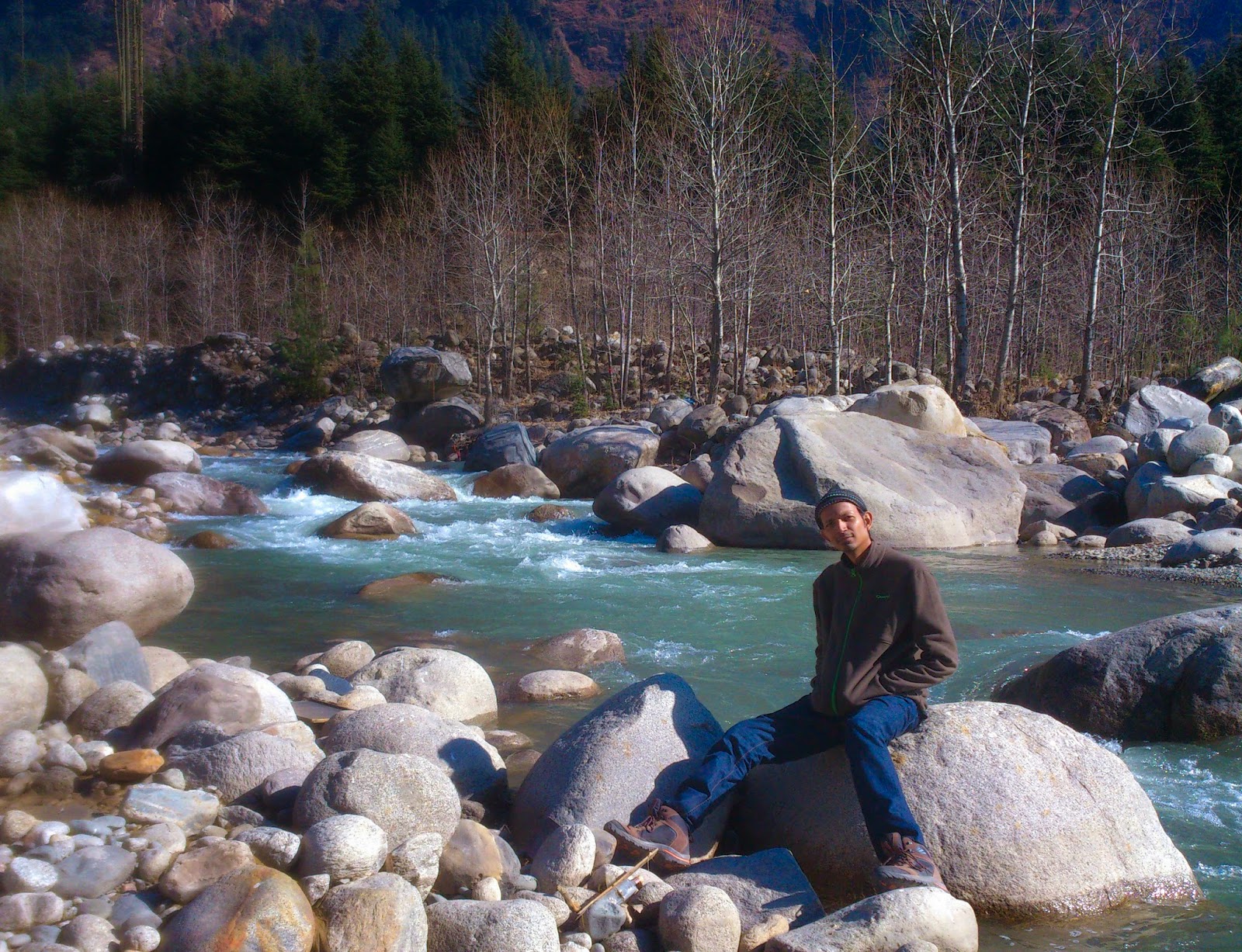 We were supposed to meet Vivek at “Vashisth village” which was about 4 Kilometres away, after a lot of bargaining we boarded the Rickshaw @ INR 35 per head, the village was on an upslope and the area near the “Vashisth Hot Springs” was filled with overpriced shops and vendors.  The Vashisth Temple was well maintained and the hot springs was basically a small cement swimming pool with stone walls, the warm water sure felt good and seemed relaxing for my feet, spent about 4 to 5 in the temple and since there was not much to be done in the vicinity we boarded a Manali – Mall road bound rickshaw @ INR 20 per head

Had a quick snack at “NYPFC” (New York Pizza & Fried Chicken) which is located near the mall road,  Frank an expert with this kind of food gave the place a “Thumbs Down” since he got a bone in his “Special Chicken” burger J...

This was the last stop before heading back to Delhi and was a good place to shop for some souvenirs, we spotted the “Tibet Emporium” just on the mall road which was a cool place filled with hand crafted good and novelties made by the Tibetans.

The owner was very composed, we spotted her sitting outside the store knitting wool, Frank however was impressed by her assistant who was this super cute young Tibetan girl, who loved the colour blue and I don’t blame him J
We also picked some Herbal Tibetan Tea and some Rhododendron wine from the shops near buy.

Dinner was served at “Chopsticks” we tried the “Sui Gyoza” which was a Japanese dish.

This was the last day in Manali for Frank, Vivek and me, Zariab would be staying back since he had a few more days of leave.

He moved to a less expensive hotel since he would be solo for a few days, “Hotel Rudraksh” @ INR 400 per day, was located just behind the Mall road.

After some last minute packing we headed towards the lower Manali bus stand which was about 6 minutes walk from the mall road.

Our travel experiences were far from over; we had got a discount on the bus tickets since it was off season, having travelled by Luxury Volvos before we knew what to expect but to our surprise this Merc. was in no way comfortable, they were quite a few passengers suffering from motion sickness, the bus attendant was rude and completely useless, they did not even bother passing “Sick Bags” around they probably did not have any. They also had some mix up with over booking and they asked Vivek to move to another seat, being kind he obliged, they wanted him to move again and he rightly told them to f**k off.

One poor soul was badly stricken with motion sickness and he puked a few times twice near the bus entrance, the bust attendant got furious and started yelling about the money it costs to clean the bus and that they waste a few litres of fuel every time they stop, he also asked him to alight and take the next bus