The journey ahead wasn't planned; Vivek was interested in visiting an ancient temple in Bharmour, we voted on it and being a first for all of us we decided to explore.

There wasn't a direct bust to Bharmour, we needed to alight a connecting bus from Chamba which left at 2:00 pm which gave us about 2 hrs to spend exploring.
Chamba is a city in the Chamba District and is a large place to explore, few hours certainly weren't enough.

A quick walk through the market revealed a certain familiarity to Crawford market in Mumbai, which was expected since its one of the major cities in Himachal.  It was a good place to shop, refill cash and do some internet surfing.

Bharmour was by far the coldest of the all the places we had visited we had experienced near freezing temperatures in Khajjiar, but this was in a class of its own.

We checked in at “Krishna Home Stay” @ INR 250 per room, which is located just left from the bust stop just a few yards away.
The accommodation was very basic with no room service but it was clean none the less. The make shift water heater was quire intriguing, I had used a similar device in Bangalore but this was quite crude, it was basically a piece of ply wood with some thermal coils arranged on it, this made taking a bath quite an adventure J

06 December, 2013 - Bharmour
Bharmour is one of those poorly maintained stop over places which can be explored within a day, its beauty lies in its ancient temples, namely the “Chaurasi Temple” and the “Bharmani Mata Temple”

Hired a Jeep @ INR 500 to the Bharmani Mata Temple which was an awesome 4 kilometers ride with all the twists and turns and the amazing weather.
We had noticed quite a few water taps being left open during our previous visits along with this time too and wondered if the Himachilis like to waste water, our Jeep guide enlightened us, he mentioned they leave the lower most tap slightly open so the water keep on flowing which stops it from freezing, which made perfect sense since the water all around us was frozen. 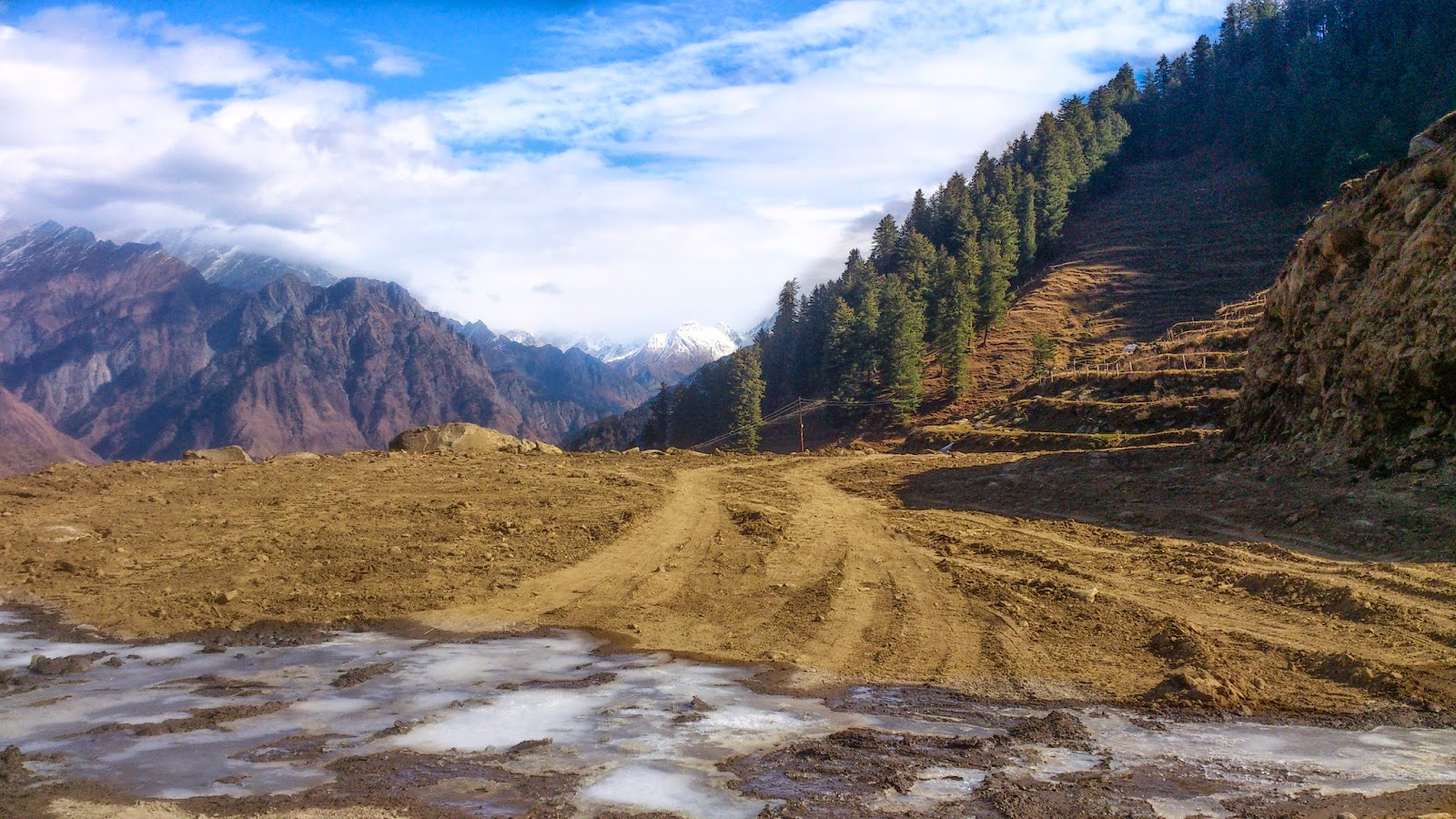 The Bharmani Mata temple complex is at the top of the ridge covered with full of pine and deodar trees situated 4 km away from the Bharmour. The place is mainly known for Goddess Bharmani Mata one of the avatars of Durga Ma. Bharmani Devi is the patron Goddess of people of Bharmour. There is Bharmani holy pool in front of Bharmani Mata temple. The dip in the pool is compulsory to complete the holy Manimahesh Yatra. It is believed that Goddess Bharmani had stolen this holy water from Lord Sandhola Naag which is located on another side of the ridge.
(Resource - http://en.wikipedia.org/wiki/Bharmour)

After spending a few hours at the Bharmani we headed towards the Chaurasi Temple complex, which is located in the centre of Bharmour town about 5 minutes walk from the bus stand.

Chaurasi Temple built approximately in 7th century, holds immense religious importance because of temples built around 1400 years ago. Life of people in Bharmour centers around the temple complex-Chaurasi (Hindi word for number eighty four), named so because of 84 shrines built in the periphery of Chaurasi Temple. The Chaurasi Temple Complex offers a delightful, clean and a scenic view.

The temple of Lakshana Devi is the oldest temple at Chaurasi Temple Bharmour. It retains many of the old architectural features of wooden temples and has richly carved entrance. It is said to be constructed by Raja Maru Varman (680 AD)
Manimahesh (Shiva) Temple: Manimahesh temple which stands in the centre of Chaurasi temple, is main temple, enshrining a huge Shiva linga. The Shiva linga is nothing but a symbol of characteristic mark of lord Shiva and is worshiped in a symbol. It portrays the Shikhara style architecture.

Narsingh (“Man-lion” - Narasimha) Temple: Narasimha is an incarnation of Vishnu in which the god is represented in therianthropic form as half man and half lion. The bronze image of this god, which is exquisitely cast, is awe-inspiring.
Lord Nandi Bull Temple: The life size metal bull Nandi, locally known as Nandigan with the broken ear and tail can be seen standing in a modern shed in front of Manimahesh temple.

After a day of exploring it was time to relax and try out the local cuisine.
We had scoped out few of the local eateries, feasted on some sweets, momo and some chicken crispy.

Vivek needed to abstain from meat and drinks on certain days, he did this to maintain
his physique and well being J

This meant that he did not have a lot of choice; as per one of the locals they prefer to eat meat so that they can withstand the biting cold.